To inform their choices, individuals often rely on observations of other people’s behavior. Situations in which individuals react to an environment consisting of other individuals who are reacting likewise give rise to complex dynamics and hard-to-predict collective outcomes. I like to study such phenomena of peer influence and diffusion in cultural markets because they lack almost entirely any objective standards of valuation. Against the notion of “mad crowds,” I am also interested in “crowd wisdom”—the advantages of groups over individuals in decision-making.

This article emphasizes the uncertainty of cultural markets and thus the relevance of social valuation in disseminating new releases. I hypothesize that recipients of culture simplify cultural choice by reacting to easily attainable signals of product value. Sales data from the German book industry (2001–2006) show that, in the highly ambiguous newcomer segment, imitation and negative media steer audience attention, at times leading to unsatisfactory aggregate outcomes, i.e. ‘bad’ bestsellers. This paper received the Karl-Polanyi-Award in 2016.

Genre assignments help audiences make sense of new releases. We introduce an empirical strategy to disentangle two mechanisms—reduced niche fitness and audience confusion—causing devaluation of category-spanning offers. Our data (2,971 feature films released to US theaters and, subsequently, on DVD) reveal strong moderating influences on categorization effects. Negative effects are far from universal, manifesting only if (a) combined genres are culturally distant, (b) products are released to a stable and highly institutionalized market context, and (c) offers lack familiarity as an alternative source of market recognition. Our study provides ramifications as to the scope conditions of categorization effects and modifies some widely acknowledged truisms regarding boundary crossing in cultural markets.

Analytical sociology (AS) focuses on social interactions among individuals and the hard-to-predict aggregate outcomes they bring about. It seeks to identify generalizable mechanisms giving rise to emergent properties of social systems which, in turn, feed back on individual decision-making. This research program benefits from computational tools (e.g. agent-based simulations, machine learning, large-scale web experiments), and has considerable overlap with the nascent field of computational social science (CSS). By providing relevant analytical tools to rigorously address sociology’s core questions, CSS has the potential to advance sociology in a similar way that the introduction of econometrics advanced economics during the last half century. In this essay, we outline how the theory-grounded approach of AS can help to move the field forward from mere descriptions and predictions to the explanation of social phenomena. 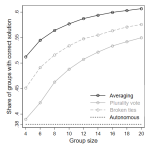 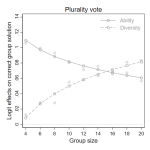 “Crowd wisdom” relies on the  aggregation of independent judgments, and group accuracy rises with the number, ability, and diversity of its members. We investigate these variables’ relative importance for collective prediction using agent-based simulation. We replicate the “diversity trumps ability” proposition for large groups. In groups smaller than 16 members, however, diversity is key only in continuous estimation tasks (averaging), and much less so in discrete choice tasks (voting). For ubiquitous voting, agents’ abilities remain crucial. The effects of group composition depend on the social decision function, and strategies to improve collective decision making must adapt to the predictive situation at hand!

Our follow-up on crowd wisdom demonstrates that, under voting, social influence contributes to information aggregation and thus strengthens collective judgment. This result stands in stark contrast to the reported effects of social influence on averaging—the highly researched yet infrequently used social decision rule—for which many have said that social influence narrows the variation in individual opinions and thus undermines crowd-wisdom effects. These kinds of agent-based simulation studies can hold important ramifications for the design of collective decision-making in both public administration and private firms.