Under this rubric, I combine research concerned with the distribution of income and individual life chances. I am particularly interested in “rich get richer” processes. Cumulative advantage plays a key role in most inequality-generating mechanisms.

Taking a spatial perspective, I study agglomeration effects—the higher productivity, interconnectedness, and creativity in larger cities—and the urban-rural disparities they give rise to. This research draws attention to the increasingly uneven economic geography observed in many countries.

The higher than expected pace of life in large cities has been explained as an emergent consequence of increased social interactions in dense urban environments. Our research calls into question this influential theory of the self-reinforcing dynamics of city growth. Using Swedish population registers, we show that half of the previously reported “superlinear” scaling of cities is due to their differences in sociodemographic composition. Those differences amplify through cities’ attraction of talent from their hinterlands. People who leave rural areas for cities crucially add to urban populations’ human capital, inventiveness, and modern lifestyles. Selective migration fuels the higher than expected outputs of big cities and, at the same time, adds to the cumulative decline of less populated regions. Our paper also signifies that the existence of an aggregate pattern in social data says little about the causal processes that brought it about. 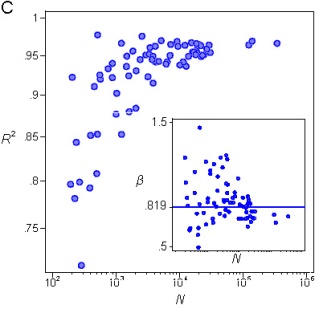 A particular perspective has come to dominate the science of cities, viewing cities of different sizes as scaled versions of one another, expected to go through similar stages of socioeconomic growth—only in different historical epochs. In this perspective, cities follow parallel growth trajectories and, as an urban system grows in wealth and people, the relative inequality between cities remains stable. Here, I test this interpretation of “urban scaling” against microdata from Swedish population registers. Those capture the city growth trajectories of an entire urban system—from the smallest town with 2,600 inhabitants to Sweden’s capital city with 2.5 million inhabitants. While big cities’ growth trajectories are extremely robust over time, places with less than 75,000 inhabitants are less resilient to economic shocks and social change. Dominant positions in the urban hierarchy advantage larger cities, placing bounds on the self-similarity of urban growth.

Three mechanisms are thought to underlay the complex association between income and life satisfaction: basic human need satisfaction, interpersonal comparison processes, and adaptation. Based on data from the World Database of Happiness, the German Socio-economic Panel, and a self conducted survey in Munich, we find all three mechanisms contributing to the nonlinear income-life satisfaction-relationship. We estimate the threshold for the fulfillment of basic material needs at approx. 800 Euros disposable income per month in Germany, in Munich, and across 144 countries worldwide. A new measurement method for social comparisons reveals that income comparisons are life-satisfaction-relevant for colleagues and average citizens, but not for friends and relatives, nor for spatially defined reference incomes at the level of neighborhoods and larger labor market regions. In sum, relative income (social as well as temporal) is more important for life satisfaction than absolute income.